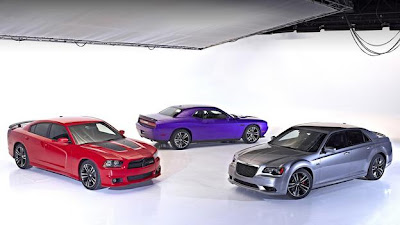 
On Saturday Night Live, Chicago was viciously parodied as a place where residents like former Chicago Bears football coach Mike Ditka would eat so much sausage and deep-dish pizza that they would be forced to self-rescue from heart attacks.

It was a joke even Chicagoans could enjoy, but it may have illustrated why this mid-American heartland capital is an ideal venue for Chrysler to unveil the latest tweaks to its iconic Hemi-engined muscle cars. An attendee at the Chicago auto show can just picture a cigar-chomping Ditka at the wheel of the 2013 Chrysler 300 SRT8 “Core” model introduced here on 7 February.

“Core” is Chrysler’s new term for a base model, not to be confused with various specialty editions. As such, the company rolled out similar “Core” models of the performance-oriented Dodge Challenger SRT8, Chrysler 300 SRT8 and Dodge Charger Super Bee SRT8.

They all feature the carried-over 6.4-litre Hemi V8 engine, boasting 470 horsepower, 470 pound-feet of torque and cylinder-deactivation technology that permits an EPA-certified highway rating of 23mpg.

Ballistic cloth inserts that debuted on the 2013 SRT Viper are applied to all three cars, and some classic paint colors make a return. Hemi Orange, TorRed and Plum Crazy join the existing palate of silver, white, gray, blue and black. The Challenger offers unique Phantom Black Tri-coat Pearl and Redline Tri-coat Pearl for 2013.

Both Dodge models wear “392” badging, representing their engine displacement in cubic inches, while the Chrysler opts for a more Continental “6.4L” badge.

All three cars are slated to reach dealers this summer. The Challenger SRT8 is priced from $39,990, the Charger SRT8 Super Bee is $42,990 and the Chrysler 300 SRT8 is $44,900 – all inclusive of $995 destination charges. In the event those prices seem a little too dear, Dodge feels your pain, which is why the brand has tarted up a base Challenger with the R/T Redline package and pegged it at $32,985. The Redline package adds 20-inch black chrome wheels and a lowered performance suspension to the base car’s 5.7-litre Hemi V8, producing 375-horsepower and 410 pound-feet of torque. Either a 6-speed manual or a 5-speed automatic transmission is available.
Another $2,000 buys the Redline Plus package, which adds Nappa leather seats, seat heaters, a 276-watt Boston Acoustics six-speaker sound system, rear park assist and remote start, among other bits.
If a price starting with a “3” still looks like too much, there is the Mopar ’13 Dodge Dart, so-named for Chrysler’s in-house customisation division. The compact sedan is dressed with lowered suspension, revised steering calibration, sport-tuned exhaust, ground effects on its bodywork and a premium brake kit. Dodge plans to build 500 units -- perhaps a conservative plan, given the dragstrip-sleeper cachet of its bygone Neon SRT-4 compact sedan.
The Dart’s 1.4-litre turbo 4-cylinder engine carries over, and like previous Mopar models, the Mopar Dart is black with blue stripes. No word yet on pricing or availability.
Lastly, Chrysler chose hard-nosed Chicago to introduce its new commercial van, the Ram ProMaster. Sourced from parent company Fiat, the van replaces the Mercedes-sourced Sprinter with a front-drive model using either a Chrysler gasoline V6 engine or 3-litre 4-cylinder diesel power. Look for one to respond to your next home-plumbing catastrophe sometime in the third quarter this year, when production commences.

Posted by Steve Douglass at 2:04 PM No comments: Links to this post

Posted by Steve Douglass at 8:29 AM No comments: Links to this post