Posted by Steve Douglass at 8:51 AM No comments: Links to this post

Posted by Steve Douglass at 8:48 AM No comments: Links to this post 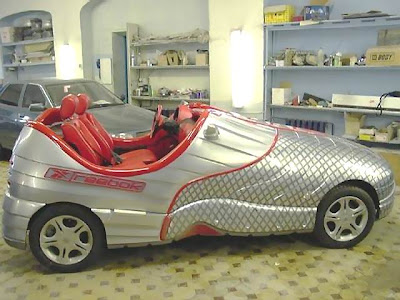 Posted by Steve Douglass at 8:41 AM No comments: Links to this post

Posted by Steve Douglass at 10:46 AM No comments: Links to this post

Could This Damage Your Car?

By Joel Grover and Matt Goldberg

Inside a Jiffy Lube on Pico and San Vicente in Los Angeles, a service technician tries to sell an undercover NBC Los Angeles employee an "engine flush" or engine cleaning.

"Engine cleaning every two years, 30,000 miles is required for the vehicle," the technician says.

But NBC Los Angeles has heard from customers across the country, who say their engines broke down after having an engine flush.

At the Jiffy Lube we went to on Pico, the technician says the engine flush will prolong the life of the engine on our Honda Accord test car.

An engine flush is where they pour a chemical solvent into your engine, supposedly to flush out old sludge.

When our undercover person asks, "is that something that Honda recommends?" Than technician says, "It requires it every two years, every 30,000 miles."

That's not true. Our car's maintenance schedule says nothing about an engine flush.

"After engine flushes, there's a pretty high incidence of some damage to the interior of the engine," Chris Martin of Honda tells NBC Los Angeles.

That's why Honda issued a memo to mechanics advising them not to perform engine flushes. Other major car-makers, including Ford, General Motors, and Nissan have all issued similar advisories against the service.

Why? Over time, gummy deposits can build up inside your engine. The chemicals used for engine flush, are supposed to break up those deposits. But car-makers say, pieces of that broken up sediment can clog up other parts of the engine and ruin it.

The car ran perfectly before I took it in that day," says Pat Marriott. He took his Nissan Sentra to a Jiffy Lube in Kansas City. "They sold me, really sold me hard on an engine flush," Marriott tells NBC Los Angeles.

He says three days later, on the highway his car broke down and he had to replace his engine for $5000.

That's because Nissan and other car-makers say damage resulting from engine flushes won't be covered by your warranty.

At other Jiffy Lube's, like one on Overland in West Los Angeles, they offered us other services like a fuel injection cleaning. That's where they put a chemical cleaner into your fuel injectors.

When the NBC Los Angeles undercover person asked the technician, "does Honda recommend that?" He said, "It's every 15,000 miles or every year, recommended."

"Using the cleaner, using a fuel injection cleaning system can cause harm to other injectors," Martin tells NBC Los Angeles.

Jiffy Lube isn't the only major chain recommending services car-makers say could be harmful. It happened to us at EZ Lube.

When our undercover person asked a technician at one of their locations in Silverlake, "Does Honda recommend an engine flush?" He replied, "They recommend... everything I'm telling you. We go by whatever the manufacturer recommends."

Our undercover person asks him for proof, since EZ Lube's computer lists all manufacturer recommendations, but there's no engine flush listed. The undercover employee asks him, "How come they're not on the computer?" The technician replied, "I don't know."

Across town at an EZ Lube near Santa Monica, technicians push a $99 transmission service using a high tech flushing machine.

Our undercover employee asks the technician, "does Honda recommend that it be done with a machine like that?" The technician responds, "Correct. That's the only way you can do it."

But Honda's memo to mechanics clearly says "do not use transmission flushing machines" because of the risks to the car.

All told four out of five Jiffy Lube's, and five out of five EZ Lube's pushed services car-makers don't recommend, but technicians told us the opposite.

We went back to the manager at that Silverlake EZ Lube.

"You said Honda recommends an engine flush. That's not true. Why did you say that?" NBC Los Angeles Investigative Reporter Joel Grover asked.

As for those technicians at Jiffy Lube who didn't tell us the truth, they wouldn't talk to us on camera and neither would their bosses.

Executives at Jiffy Lube and EZ Lube declined our offer to watch our undercover tape, and do interviews.

But in separate statements, both companies said it was unacceptable for their employees to misrepresent certain services as manufacturer recommendations, when they're not.

EZ Lube says some of the employees we caught doing this will be terminated.

Jiffy Lube says they're taking steps to minimize the chance of it occurring again and they want to hear from any unhappy customers.

Posted by Bernard's Advanced Collision at 9:52 PM No comments: Links to this post