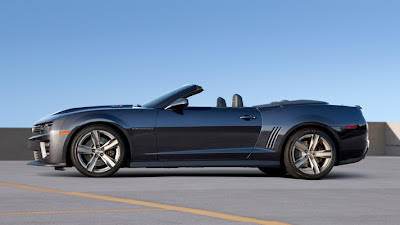 Has Chevrolet heeded none of Sir John Dalberg-Acton's legendary, chilling advice? That all power tends to corrupt, and absolute power corrupts absolutely?

One can merely speculate as to whether the new Chevrolet Camaro ZL1 convertible's 580hp corrupts; whether that stratospheric power output will liquidise rear tyres, raze poorly fixed hairpieces and vaporise your spine. That's right, dearest Internet badgers, the new Chevy Camaro ZL1 drop-top now produces 580 horses and 556 torques. It is Chevy's most powerful drop-top ever. Ever.

The coupe version of the ZL1 recently did a lap of Germany’s 13-mile-long Nurburgring Nordschleife race track in 7:41, putting it in the same league with supercars like the Mercedes-Benz SLS and Porsche 911 GT3.

Pricing has not yet been released, but is expected to fall in the $50-$60,000 range.
Unfortunately for potential buyers who live in four-season states, the ZL1 Convertible doesn’t go on sale until the end of 2012, so they’ll have to live another summer without it.
At least that gives them plenty of time to pick a new hairstyle.
Posted by Steve Douglass at 7:36 AM No comments: Links to this post