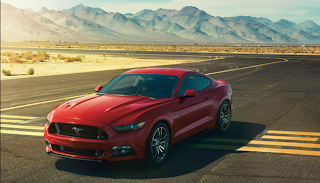 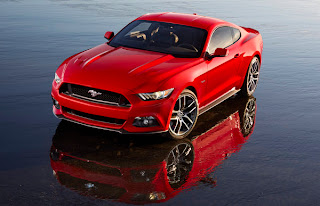 Ford Motor Co. unveiled the sixth generation of its Mustang on Wednesday night, nearly 50 years after the original debuted at the New York World’s Fair.
The automaker released photos of the 2015 Mustang and planned to show it off in a global reveal at events in Los Angeles; New York; Dearborn, Mich.; Barcelona, Spain; Shanghai; and Sidney, Australia, on Thursday. The new version of the iconic American sports coupe will go on sale late next year.
“Every car company has a vehicle that strikes to the heart and soul of the company, and for us that is the Mustang,” said Mark Fields, Ford’s chief operating officer.
PHOTOS: Ford debuts 2015 Mustang
The new model hews closely to the styling that enabled Ford to sell 9 million Mustangs and made the car a star of countless movies, television shows and even postage stamps. Ford plans to take advantage of its international fame -- there’s a Mustang club even in remote Iceland -- to launch sales in Europe and Asia.
Anyone seeing the car will instantly recognize it as a Mustang, with its long sculpted hood and short rear deck. The styling is most evocative of the 1969 model.
“When you see it, you know it has the bloodlines of a Mustang but is designed for the 21st century,” Fields said.
The shark nose grill leans forward to give an impression of movement and aggression. The trademark tri-bar tail lamps now come in a three-dimensional configuration that lends depth to the rear. The sloping fast-back roof profile shouts Mustang more than anything else.
Ford’s challenge: to honor a half-century of history while injecting the car with modern engines, technology and styling cues.
It will offer three engine choices. The base model will have a 3.7-liter V6 with at least 300 horsepower and 270 pound-feet of torque. Ford also plans a turbo-charged four cylinder that will have about the same horsepower but more torque and better fuel economy.

The performance Mustang will come with a 5.0-liter V8 that will produce more than the 420 horsepower and 390 pound-feet of torque that’s in the current GT model.